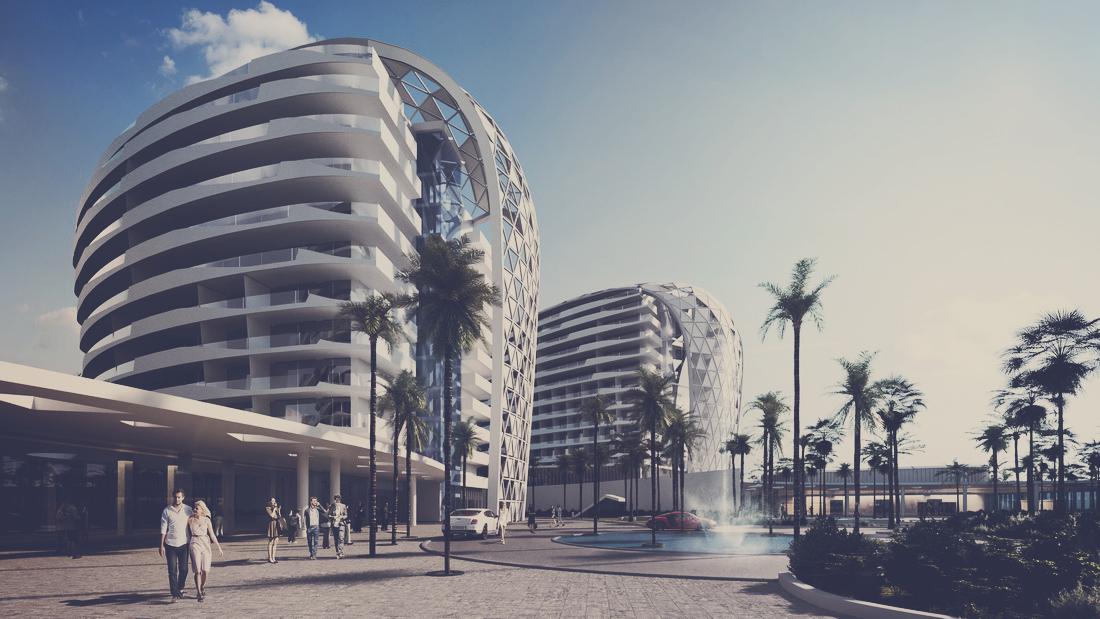 The Peninsula is a 200.000 sqm mixed-use seaside complex, part of the Eden City Cyprus development – a luxury resort community on the Mediterranean. The project is situated in Geroskipou, at the seaside between Paphos and the nearby airport. The 4 km long boardwalk extends here from Paphos Marina, where the land forms a peninsula into the sea – rendering high potential for a luxury development, with above average exposure to the coastline and superb views.

The complex consists of five towers offering panoramic views of the deep blue sea – including 5 star international branded hotel with 221 units & 122 luxury residential apartments over 11 floors. The residential towars are Connected by a Spa, that provides relaxation to the residents. Beneath the complex and the internal part of the development is a basement containing 173 + 163 parking spaces, M&E technical rooms, and hotel back of house functions.

The three towers are almond shaped, allowing light and air to penetrate between the buildings, and maximizing the number of units with views opening to the sea. The long, curved façade are lined with deep terraces, which extend the floor area of each unit with a transitional outdoor space, while also providing shade against overheating. The facades are entirely glass, allowing a seamless experience of the Mediterranean surroundings. The low mass connecting the towers is also resembled by a high ratio of glazed surfaces, opening up the functions to the environment – complimented by a variety of shading elements.

The density and footprint of the build-up are relatively high for the area, however a sustainable environment is achieved thanks to the vast public green surface and boardwalk encircling the development; these high quality areas provide spatial extension and an interaction of public & private use.

The landscaping concept reflects on three different areas of the project:

The northern, internal part is mainly an access area to the development, characterized by two grand promenades with two large water features in the focal points of the towers – dissolving the linearity of the entrance axis, giving reflections of the towers, and improving microclimate via evaporation.

The public promenade running along the seaside lines up a variety of programmatic elements. An urban piazza at the western part hosts crowd events, adjoined by seaside restaurant, and sandy beach. An open-air theatre is placed at 1.5 m above sea level, bordered by a graded auditorium. Proceeding on the coast, the rocky embankment wall of the landfill continues in a retaining wall, complimented by lower terraces close to the level of the sea. Playground and outdoor fitness area are found at the eastern part of the promenade, finishing in a sandy beach. 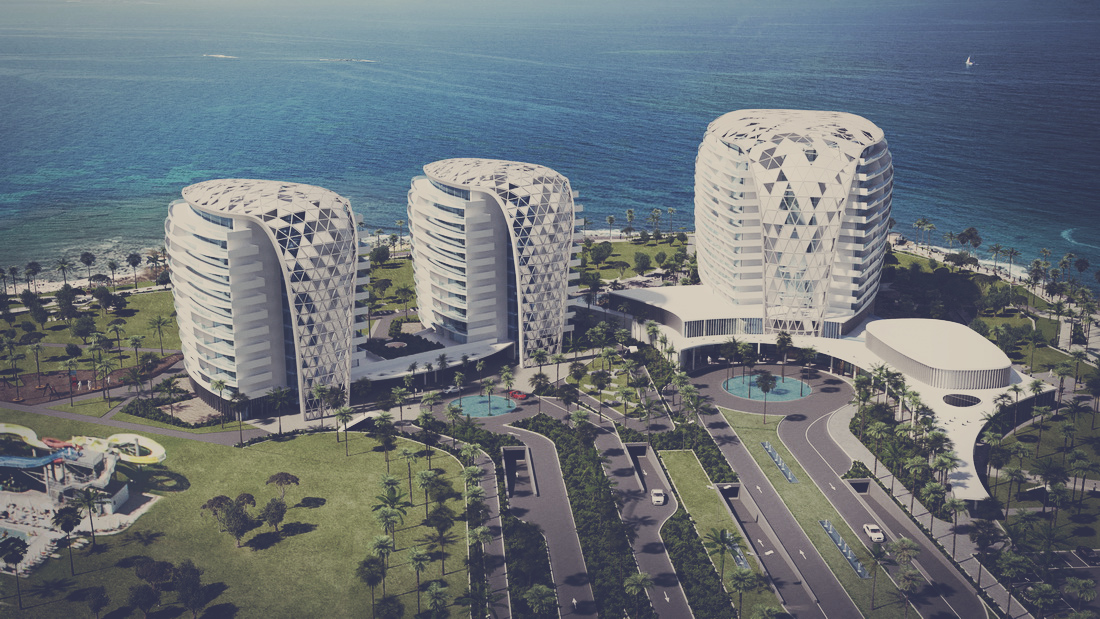 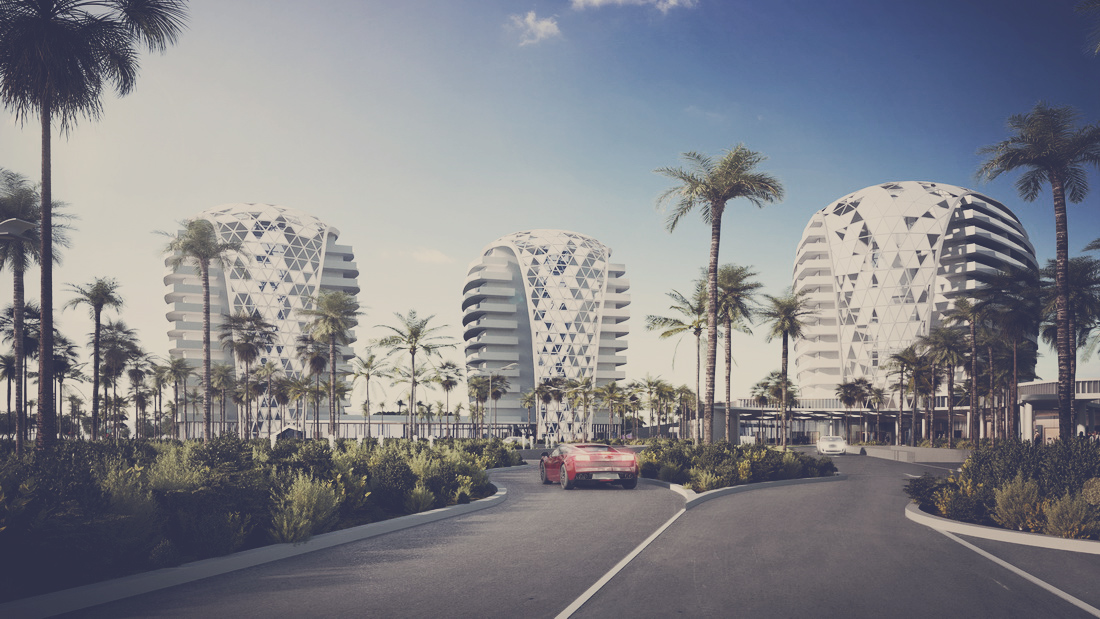 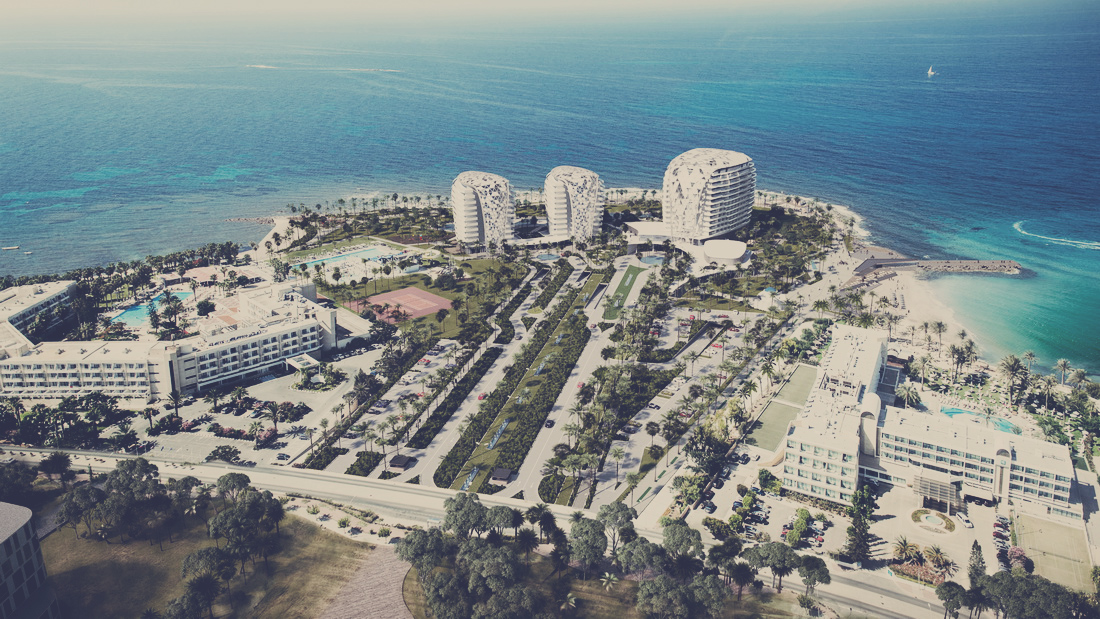 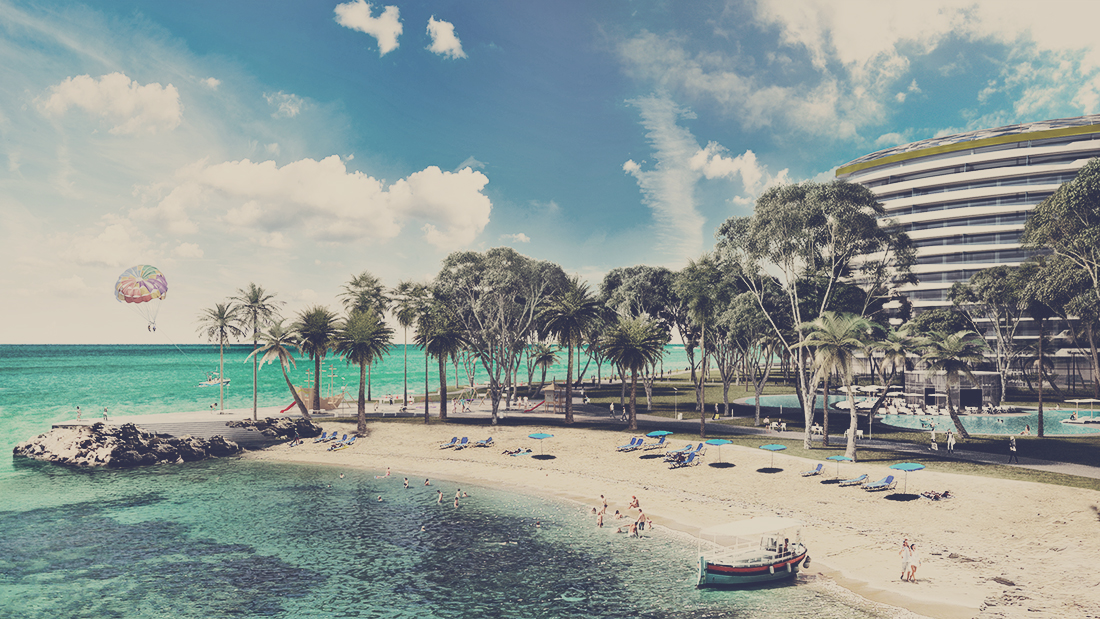 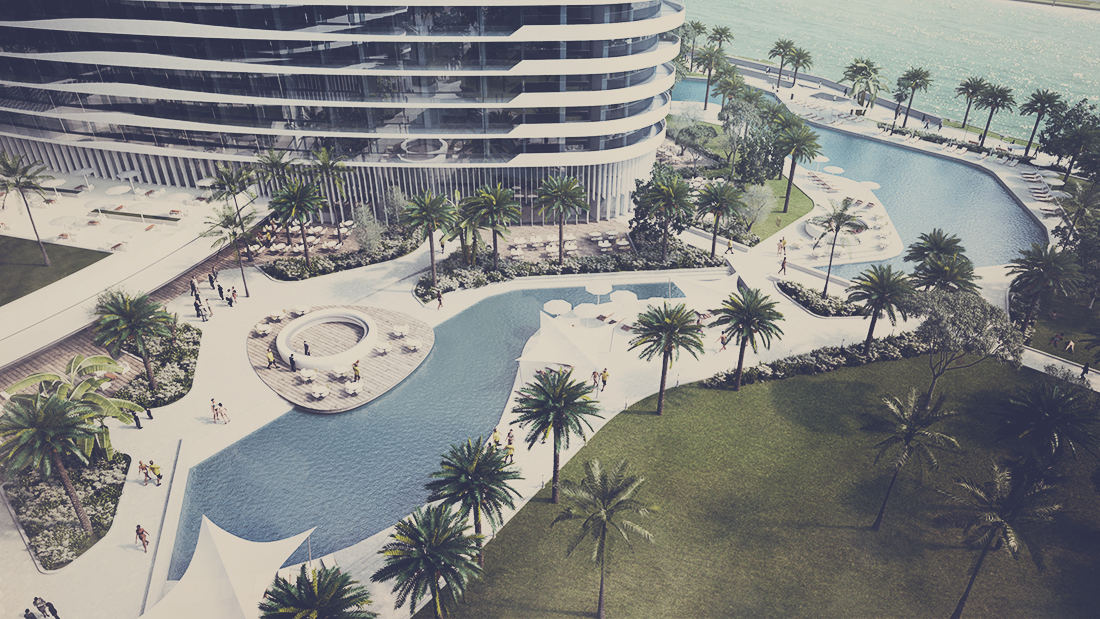 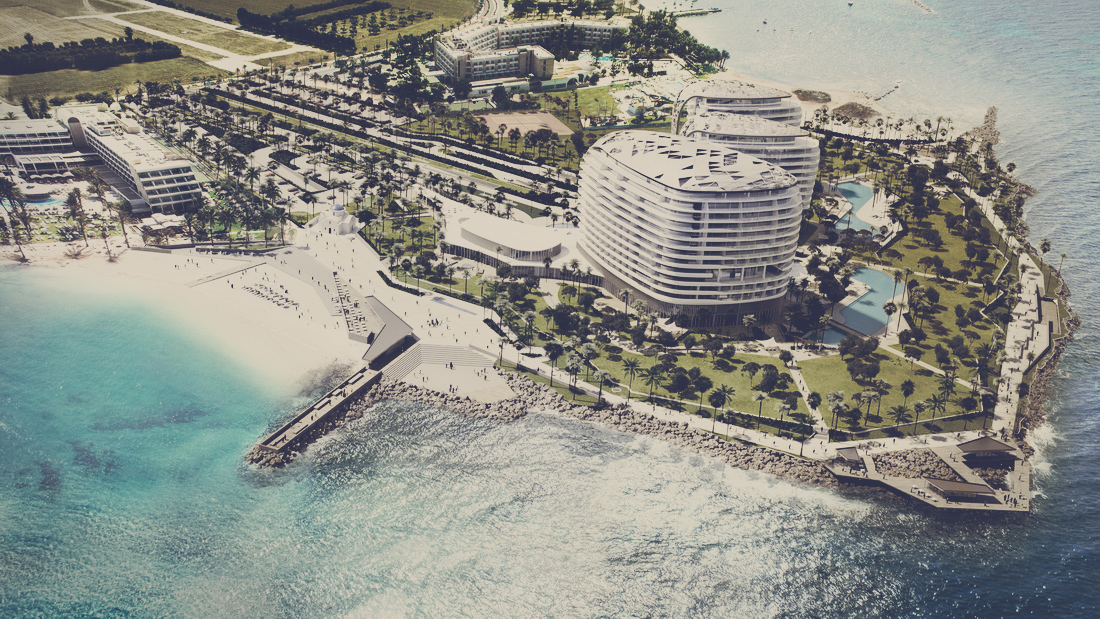 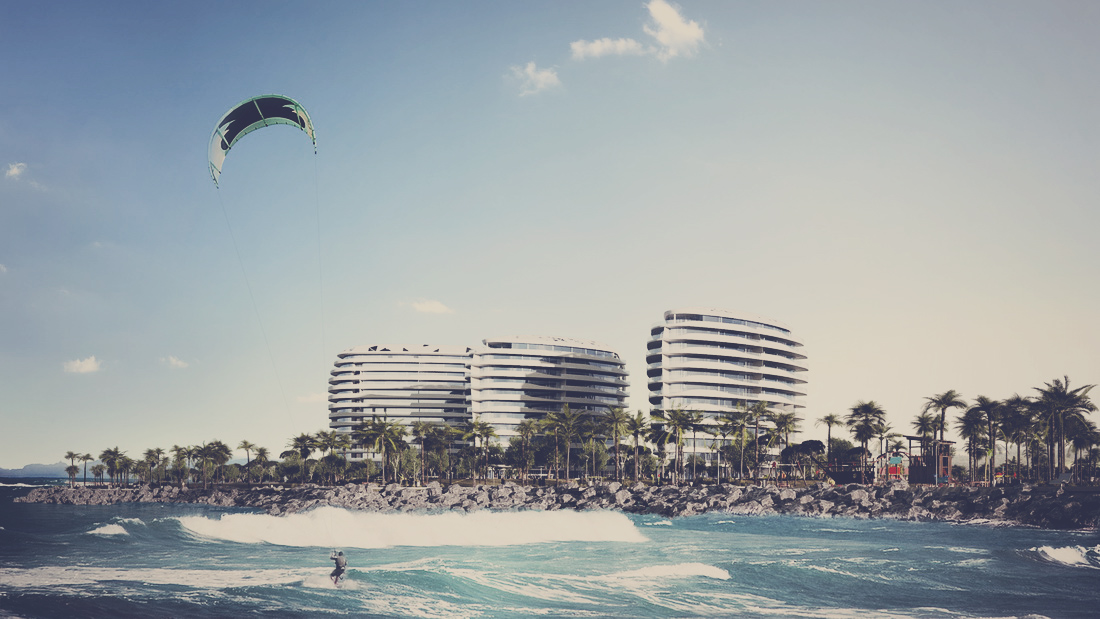